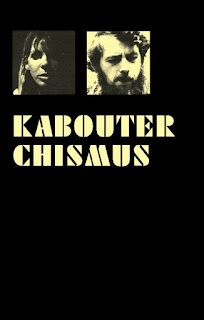 Kabouter Chismus was a short-lived project of Dutch singer-songwriter Nico Denhoorn and singer Minneke Walstra. This record represents a certain Dutch hippie movement that started out in the early sixties called Provo. Provo in Holland was one of the first worldwide movements of youth culture created in 1964 and in a way precedes many of the later proper hippie movements of America. It was very much influenced by Beat Generation writers, Marquis de Sade, Dada and anarchism. The Provo generation were one of the first generations to question environmental problems, challenge conservatism and advocate for women emancipation and progressive acadamic innovations in post-war Europe. When the provo movement somewhat vanished in the same way Dada had decades earlier it gradually transformed into a movement in which people called themselves Kabouters, meaning Gnomes. basically the Kabouters took the provo mentality further into the years to come. They called The Netherlands Oranje Vrijstaat, which means Orange Free State, opposing the monarchy and wars western countries were engaging in during cold war. During that time Amsterdam was globally regarded as a liberal hippie capital. Its reputation of freedom to smoke weed and absolute freedom for gays is also rooted in this era.
Musically this album is sometimes reminiscent of Boudewijn de Groot, but more versatile. The basis is acoustic guitars with added electric guitars, flutes and other instruments. Some songs are in English and some are in Dutch. Official reissue, 100 copies.